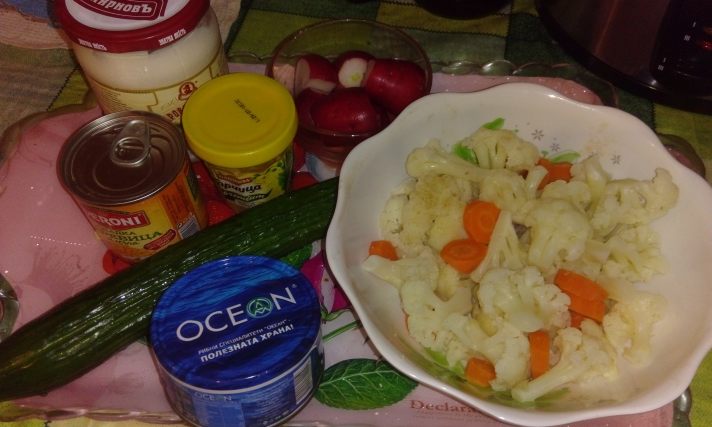 Sorry, sorry, sooorryyyy! This series was meant to take a few days and be done with. Eyes will probably start rolling now, but I swear this is the truth: I got swamped with work, then went out of town for a couple of days and time just passed. In fact, I’m using a lull in the daily workflow to get this one finished and dispatched. Yep, I feel guilty, please don’t hate me!

So, let’s proceed. On day three of this cauliflower journey, there will be no cooking, just mixing stuff together. Well, apart from where you spend a couple of minutes to throw the cauliflower and carrots into the veggie steamer.

Here’s an interesting fact: for most of my life, I had no idea what tuna fish tasted like. I won’t start reminiscing about my childhood and adolescence, which were spent under an authoritarian communist regime. What I want to say is that many things were unknown in these parts, tuna included. Sure, we had fresh and canned fish, but no tuna graced supermarket shelves. At least the masses didn’t have it, the bastard commie elite may have gorged themselves on it.

The point of telling you this is to make it known that I have become a huge fan of tuna in recent years. No, I don’t start salivating profusely and acting strangely at the sight of it, but I do love it. Ergo, today you’re getting a recipe that features tuna. We’ll be having a salad of sorts, for which you need your cauliflower and carrot mixture plus the following:

Do you even need me to tell you what to do?! Just in case you do, here’s the procedure: chop up the cucumber and radishes, add to the cauliflower, and then throw in the corn and the tuna. In another bowl, scoop up some mayo and mix with a bit of mustard. The quantities will depend on how much dressing you want and how mustardy you prefer it.

And here’s what you get for your efforts: 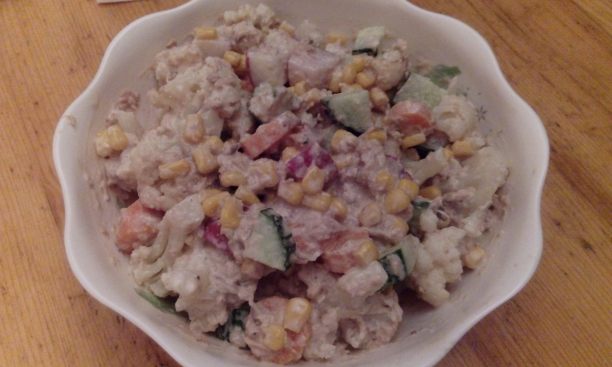 Incidentally, I’m having another tuna-based salad for dinner today. Don’t worry, I won’t be forcing that recipe on you as well. In fact, my cauliflower head proved enough for four meals, so the next post will be the final in this series. Then I really need a change of theme or people might think they’ve stumbled across a cooking blog. Which they have not, I must point out.