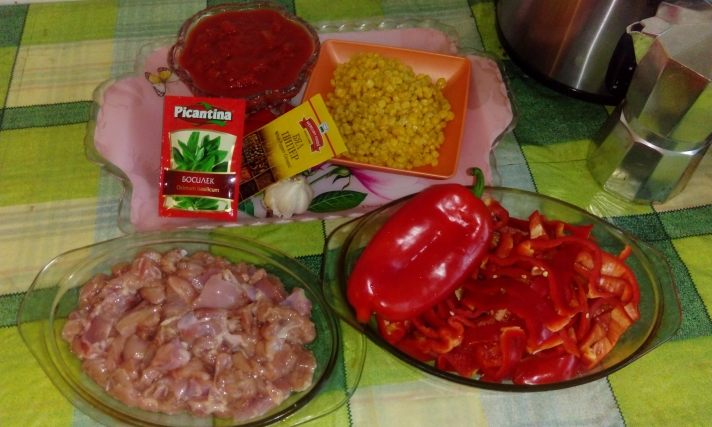 ‘Twas a day of peppery pleasure

Remember a while back, when I shared with you the recipe for a fantastic meal? Well, I happen to find it exquisite, you may beg to differ. Anyhoo, I told you then I’d be back one day with the recipe for one of my favorite dishes and here I am. Sorry it’s taken this long but I had to up and cook it, you know, take pictures and stuff. And that’s just what I did the other day, which is the reason I’m now at my desk, pounding away on the keyboard.

Before we get into the swing of things, let’s give credit where it’s due. I did not come up with this recipe, uh-uh. It resides here but might not be of great help because it’s in my native language (Bulgarian). You can try with translation or you can just rely on me – I’ll give you my version but also tell you what the original says.

Now, this one is supposed to be a salad – you prepare it, let it cool and serve it. I’ll probably become the object of ridicule, but I’ll go ahead and say it anyway: I’ve consumed this in the prescribed way but I have it more often as a proper meal. You know, serving it hot with crusty, fragrant bread to dip in the sauce.

The second thing I want to note is that you’re supposed to grill the peppers and peel them. I tell you right away it’s too much hassle for me. I might be persuaded to grill peppers, but I do my Speedy Gonzales act when peeling looms. Besides, very few things smell as heavenly as frying peppers or taste as good. In other words, my version has the peppers fried.

OK, we’re ready to get cracking. If you’d be so kind as to look at the picture above, you’ll see the ingredients you need and realize it’s a simple meal. I have another selling point: it only takes about half an hour to prepare. Here’s what I invested in this cooking venture:

It’s all pretty straightforward from here on. Heat the oil and start frying the chicken. A couple of minutes will suffice because you’ll get to cook it some more when you add the peppers. Don’t let them fry for too long either as they’ll get mushy when the tomatoes go in. Say, 10 minutes max for the peppers, then on with the tomatoes and the garlic. That’s where most of the cooking time will go – give the tomatoes at least 15 minutes, adding the white pepper and the basil at some point. When you decide it’s just about ready, throw in the corn and let the whole mixture cook for another minute. Turn off the heat and you’re done. Congrats! 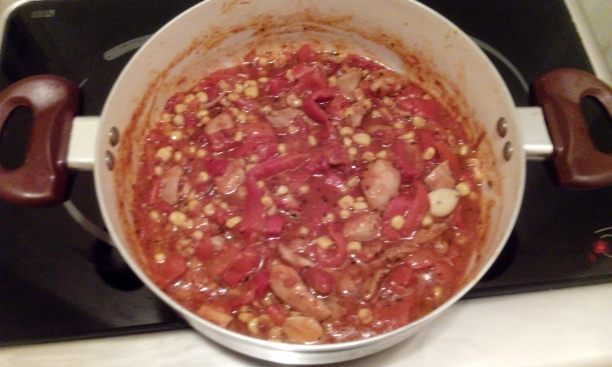 Whether you serve the cold or warm version, I hope you find that half an hour time well spent. Bon appetit!